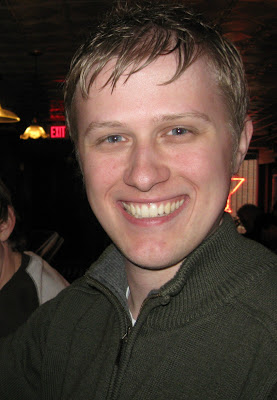 Ian Denning is currently enrolled in the MFA in fiction at the University of New Hampshire. His short fiction has appeared in A Cappella Zoo and 5×5, and is forthcoming in the Absent Willow Review. He also holds a Master’s from Western Washington University. He likes beer, cats, books, and video games.

I’ve just returned to short stories after two weeks of devouring novel after novel (six novels in twelve days; man I love free time), and I’m having a hard time readjusting to the format. Short stories are just so… well… short. They’re quick, bite-size, a handful of almonds to the novel’s steak dinner. I remembered Jory’s post a month and a half ago about how he has a difficult time reading short stories, and then I remembered that I used to have a difficult time reading them too.

I used to feel like Rita’s., who commented on the original post that short stories make her feel “disgruntled: wanting more or far less.” I would read a short story and either not “get it” and wish that I hadn’t read it at all, or enjoy the characters and wish that the short story were a novel, so I could really dig into them. But I was a creative writing student who specialized in fiction, so I had to keep reading short stories, and eventually I started to like them. I think it’s a matter of developing a literacy.

There are certain things the conventional short story has—some kind of draw to start you reading, character development, an epiphany near the end—and we often come with expectations about what short stories are supposed to accomplish (I blame an undergrad English curriculum full of Carver and Joyce and the literary descendants of Sherwood Anderson). Part of the joy of reading a short story, for me, is seeing how the author plays with and against the qualities of the archetypal short story. I used to be a songwriter, and after listening to so many thousands of pop songs, I developed a good ear for separating those who used common pop song structures and those who molded them and cut them up and twisted them around to fit their own purposes. Short stories are the same.

“Deep, Michigan” by Josie Sigler, published in the 2008 issue of Water-Stone Review, is about an eighteen year-old who gets arrested for joy-riding with his friends (and a gun in the car), does his time, joins the marines, is wounded in Iraq and comes home to see his old high school friends, who work in factories or fast food restaurants. I was enjoying the story, but not blown away, until the ending, where Sigler uses the first-person narrator—the only of the wounded boys’ friends to show him much compassion—to give us a peek into the future: the boy’s pain is too much and he begs his friends to help him kill himself. Eventually the boy does it himself. We then return to the present, where the boys, intimidated by their friend’s crippling war wound but still wanting things to return to how they were, settle down to play video games.

It’s a killer ending, and I haven’t done it justice (just read the story), but the point I want to make is that I did not expect the shift into the future, and it gave the whole ending a feeling of creepy predestination and transcendence. “Deep, Michigan” helped me remember that short stories can move in nimble ways that novels can’t, and tie the weird beauty of the poetic unexpected to narrative forms. I don’t think I would have felt that way about the story if I hadn’t read (or been forced to read) collection and collection after anthology—and now, after so many novels (and an excellent J.D. Salinger biography by Ian Hamilton), I’m ready to dive back into short fiction.