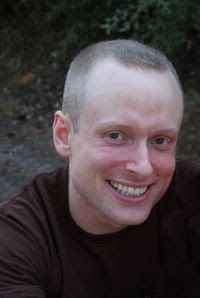 Jeremy Halinen is a poet and the co-editor and co-founder of Knockout Literary Magazine (knockoutlit.org). Some of his recent poems appear in Arroyo Literary Review; Best Gay Poetry 2008; Dos Passos Review; Pontoon: an anthology of Washington State Poets, Number Ten; Quarter After Eight; and Rio Grande Review. Halinen holds an MFA in creative writing from Eastern Washington University. He resides in Seattle.

This interview was conducted in December 2008.

Jory Mickelson: Tell me a bit more about yourself and your writing history.

Jeremy Halinen: I started writing when I was eight or ten years old. I didn’t start writing poetry until I was in college. I majored in music, but traveled and studied in Italy and Lithuania. I was very fortunate to study under the daughter of Ezra Pound for a semester. I graduated with a B.A. in 2003 and then got my M.F.A. in creative writing from Eastern Washington University in 2005. I now work as a legal assistant, write poems, and am the co-editor of Knockout.

JM: Why do you write poetry?

JH: To me [poetry] is what gets at the root of things. It is rooted in the human voice and vocal expression. It is one of the earliest forms of the arts. I enjoy writing fiction and plays, but poetry is the only thing that sustains my attention. I do write fiction once and a while, although they are usually shorter pieces.

JM: What do you mean that poetry is rooted in the human voice?

JH: Poetry differs when it is printed on the page vs. when it is spoken aloud. I push my own poetry to work on the page. I push it hard to bridge the gap between read and read aloud. But, I do like how you can place a poem on the page (using the blank space as part of the poem).

JH: Poetry in the world does more than here in the United States. I would say that poetry is a bigger part of the lives of people in poorer countries. Poetry isn’t a mass media. People’s lives in those countries are not so intertwined with television and radio. They have more time to think and communicate. It does seem like poetry is gaining in popularity though. There are more poetry books printed every year, but who knows if they are being read. I would say that poetry is as relevant as anything else is. More relevant than television, but poetry is not financially relevant.

JM: What would you say to people who don’t read poetry?

JH: No one should be force-fed. Poetry isn’t like those geese that are force fed to make foie gras. There is a trend towards animating poems, online, and I am hoping that this reaches a wider audience. People’s exposure to poetry is limited. It really doesn’t bother me if people don’t read poetry. I think that for a poet to be read widely, he or she has to be very conscious of contemporary life—speak in a voice that people can understand.

JM: Who are some poets that you read and admire?

JH: I read Nathan Whiting; he lives in Brooklyn and is a former marathon runner. He is in his mid-to-late 60’s now. I like Tony Hoagland, Robinson Jeffers, and Mark Doty. I know I am forgetting some people. There is a list around here somewhere of poets that I have read and come back to…

JM: Where do you think queer literature is right now and where is it headed?

JH: Queer lit is growing tremendously. There is a larger audience for it. The queer writing community has really come together and I think the Internet has helped that. There are a few queer literary conferences around the country. I went to Saints and Sinners last year in New Orleans, it was great to be around so many queer people who are passionate about writing. The literature of queer people is very diverse now; there isn’t one specific genre.

In the 1980’s there was a focus on coming out literature. I don’t think writers have to do that anymore. We are finally taking a broader look at the world and our own lives. I think that work can be edgier now. That is not to say that earlier writers weren’t edgy, but there is an opportunity now with such a diverse market to be more experimental.

I would like to see more funding for queer literature. I want to see funding for writing, poetry. Maybe with Obama in office there will be a little trickle down. That would be nice.

JM: You are also an editor?

JH: That started a long time ago. I have always been editing. I was home schooled and my father taught me how to write. I was an editor for my high school paper and in college, I edited literary journals, like Willow Springs at Eastern. Now I am the co-editor of Knockout. One of my favorite things about writing poems is the revision process.

JM: How did Knockout come about?

JH: Brett Ortler and I wanted to start a literary magazine for quite a while. We were working together at Willow Springs at Eastern. We each had one vote out of 30 for which poems went into Willow Springs. (Laughs) We wanted more say in what made it into the magazine. I originally wanted a magazine that was all queer, but Brett wanted a 50-50 split. I came around to the 50-50 idea. We are the first magazine to do this split between gay and straight writers that I know of. We started in February of 2007 and the first issue came out in late 2007.

There are only two of us working on it, so the process is slow. My sister does the design work. We are lucky to have someone with a degree in graphic design to lay out the magazine, not many magazines have that. Still, it takes us a long time to put out an issue. We don’t have 30 people on staff like where I used to work.

JM: What are you hoping to do in the future?

JH: I am considering getting a Ph.D. in creative writing. I feel like my poetry is developing the way I want it to, but an advanced degree can lead to an academic career. I am pursuing a Stegner Fellowship, a two-year creative writing fellowship at Stanford. I also completed my first full-length collection of about 45 to 50 poems. I sent it out to several book contests and small presses. I am also working on a second book of poems.

JM: Do you have any last words for our readers?

Jeremy was recently featured on the Joe Milford Poetry Show. You can hear another interview with him at http://www.blogtalkradio.com/Joe-Milford-Show/2009/08/15/Joe-Milford-Hosts-Jeremy-Halinen