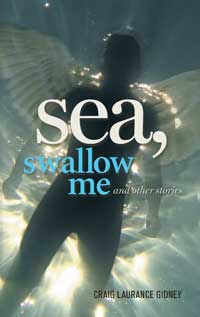 Visiting one of my favorite gay bookstores, Lambda Rising in Washington D.C., I picked up a copy of Sea Swallow Me and Other Stories. Here I am again, telling you about my travels and the books that I buy.

Gidney’s collection of short stories run the gambit from the young Rimbaud riding the train into Paris in “Strange Alphabets” to falling for an allegorical figure at a dance club in D.C. in “Etiolate.” Every story in this collection stands apart from the others in its imagination. It is rare for me to find an author who can handle such disparate settings and characters well. I was as immersed in the plantation era “The Safety of Thorns” as much as I was by the medieval Japanese monastery in “A Bird of Ice.”

I am particularly fond of Gidney’s use of several different kinds of myth and fable. These fantastical stories are populated by African Diaspora gods, creatures from Japanese myth, historical figures and even the embodiment of longing. Like the human characters in Sea Swallow Me’s stories, the imaginative ones are compelling and flawed. In “The Safety of Thorns,” it appears that a Green Man or Jack in the green is as lost and confused as the mortals he reveals himself too.

Sometimes there is no need for a mythical villain. My two favorite stories in Sea Swallow Me allow the characters to project their own problems into the realm of fantasy. “Circus-Boy Without a Safety Net” is a wonderful take on the coming out story, opens with the fantastic first lines, “Lucifer came to him in drag. He was disguised as Lena Horne.” Gidney’s two-page wonder, “Magpie Sisters” conflates Vonda’s kleptomania with the bird in the story’s title.

Gidney has some weak moments in this collection as well. “Strange Alphabets” while lovely in its conception lagged in its execution. I was interested in how the story would end, but I wasn’t sure I wanted to wade through the entire piece. It could have been shortened without ill effect. “Her Spirit Hovering” attempted to address the figure of the overbearing mother with humor. His story becomes more of a worn-out joke than a strong piece of fiction.

Again and again, Sea Swallow Me surprised me with its fresh eye and fertile imagination. Gidney’s language can be sharp and haunting. He takes his readers for a ride through strange and dark landscapes. Although the ride is enjoyable, be sure that you keep your windows rolled up and the doors locked.