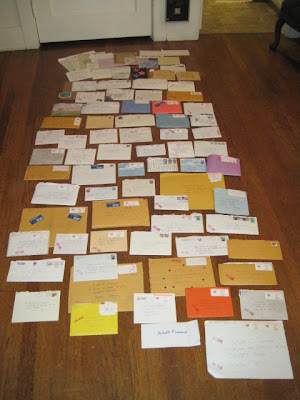 What good is a letter sent by snail mail these days?  Don’t get me wrong, most of us appreciate hand written letters.  They are such an unexpected pleasure to receive in an age of tweets, text messages and e-mail.  It takes time to put pen paper, label an envelope and hunt for stamps.  It’s much easier to post “Have a Great Birthday!!!” on someone’s Facebook wall cross one more thing off the To-Do list.
A letter has an aesthetic pleasure for certain, but I would say it weighs even heavier than pleasure.  We know a great deal of what we know about earlier writers and poets from their letters.  Where would our conceptions of the spare writing Elizabeth Bishop be without her correspondence?  I could never imagine her having a torrid love affair in South America from her gem-like poems.
The letters of John Keats is where we poets get the idea of negative capability (the poet’s capacity for accepting uncertainty and the unresolved.)  He didn’t lecture on it.  Keats wrote letters filled with his ideas about poetry.  Letters to a Young Poet, a correspondence of ten letters between Rainer Maria Rilke and an aspiring writer have informed other aspiring poets for nearly a century.
In the “old days” letter writing was the main means of communication between artists about their lives and their craft.  In today’s digital age, with the impermanence of e-mail, I wonder what records writers will leave for history.  I don’t know about you, but I don’t save most email or print it out for posterity the way I bundle letters together in a box.  They simply disappear back into the internet’s invisible sea. 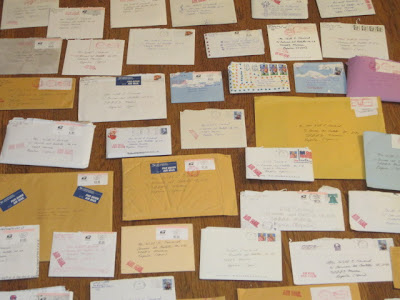 This fall my ex boyfriend sent me letters that I wrote to him twelve years ago while he was in Spain.  He thoughtfully saved my correspondence long after the relationship ended.  The box I received contained 70-80 cards and letters totaling almost 250 hand-written pages.  I was twenty-two and in love.
I was writing a memoir piece about this same period in my life.  My memories were supported, amended, edited and contradicted by what the letters contained.  From September of 1998 to June of 1999 (after reading the letters) I have a very good idea of who I was and what was happening in my life.  My memory failed to illuminate so many people, situations and experiences that would have been lost without this correspondence. 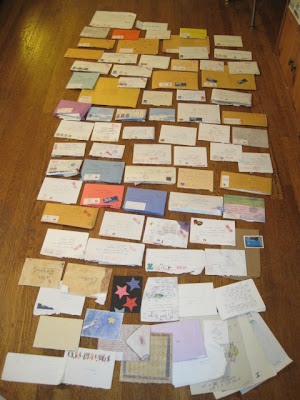 Letters continue to have value in our age of rocketing technology.  They remain a physical artifact when so much of our words are becoming digital ephemera.  This post isn’t to encourage or chide you to turn back the clock and being writing letters again (yes it is), but to highlight what I have learned from firsthand experience.  I will continue to write my friends few and far between who write me back.  I want to know about myself someday far in the future and I know my memory is a hazy lens at best.
Posted in correspondence, e-mail, elizabeth bishop, Facebook, John Keats, letters, Letters to a Young Poet, mail, Rainer Maria Rilke, snail mail, text messages, Twitter.