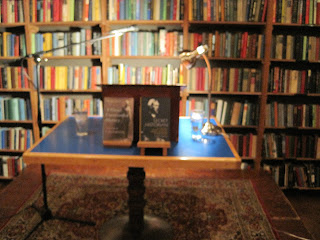 I drove seven hours in one direction for a book reading this past Monday. I have been following Justin Spring’s Book Secret Historian: The life and times of Samuel Steward, professor, tattoo artist, and sexual renegade for almost a year. When I saw that Mr. Spring was reading at Elliot Bay Book Company in Seattle, I had to go. His only other West Coast appearance was in San Francisco.

Also Wendy Moffat read from her new book A Great Unrecorded History: A New Life of E.M. Forster. Her book is an exposition of Forster’s life as a gay man. It documents his sexual and romantic life that’s been ignored by previous biographers.

Both authors said that they had spent about ten years writing their books and met because their research crossed paths. Both were writing about gay social history in the United States during the 40s, 50s and 60s. Friends of Sam Steward and E.M. Forster overlapped although they had no recorded contact with one another.

Moffat said that it was a relief to find someone else doing work in this field, because it is a veritable blank spot in American history. The life of gay men prior to Stonewall remains largely undocumented due to secrecy, shame and its clandestine nature. 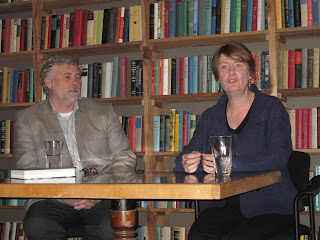 What struck me was the contrast between the books’ subjects. One was a biography of a very famous person from a new angle; the other was a biography about someone that is entirely unknown. Forster’s biography was written to highlight his life and how that affects the reading of his work. Steward’s biography was generated because of the fascinating life he led.

Samuel Steward was an English professor who left a life of academia to pursue other passions. He was friends with and corresponded with Gertrude Stein. He worked with Alfred Kinsey. He was the tattoo artist for the Hell’s Angels under the name Sam Sparrow. He wrote literary gay male pornography under the name Phil Andros. Sam Steward also documented his voracious sex life from early adolescence until a decade before his death in 1993.

E.M. Forster wrote and rewrote his homosexual novel Maurice throughout much of his life. At first he said he didn’t want it published while his mother was alive because it would upset her. After her death, he said he didn’t want to publish it because it would cause problems for his long-time lover, a married police officer. Maurice was published shortly after Forster’s death in 1970.

The reading was wonderful and I hope to be speaking with these authors in the future. 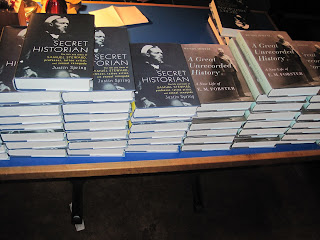