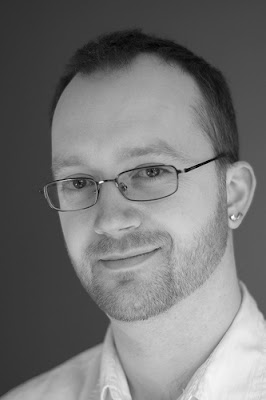 ‘Nathan Burgoine is an ex-pat Brit living in Ottawa, Canada with his husband. His works appear in FOOL FOR LOVE (Cleis Press), edited by R.D. Cochrane and Timothy J. Lambert; I LIKE IT LIKE THAT (Arsenal Pulp Press), edited by Lawrence Schimel and Richard Labonte; 5×5 Literary Magazine; and I DO TWO (MLR Press) edited by Kris Jacen. He has two more upcoming short stories appearing in BLOOD SACRAMENTS (Bold Stroke Books), edited by Todd Gregory; and TENTED (Lethe Press), edited by Jerry Wheeler.

In today’s blog, the role of Jory M. Mickelson will be played by ‘Nathan Burgoine.

You might be wondering “What’s with the apostrophe?” I get that a lot.

The answer is my grade eleven English teacher. She was the first English teacher to really catch my attention and introduce me to new authors and genres. In those days I was still using my full first name but when I decided to drop the first two letters – that’s a clue – I put the apostrophe where it belonged, mostly as an homage to the woman who had opened my eyes to the joy of language. I think she’d appreciate it.

She was also the teacher who handed me my first gay character. She loaned students books from her personal library, and recommended titles she thought we’d like. She had an uncanny sense of what we’d enjoy. I’m not entirely sure she intended it to be the event that it was and I’m a little embarrassed to say I can’t recall the title or author of the book. What mattered, however, was that there was a capable and strong male character who happened to be gay. He was a marine, actually, if my memory serves. He helped a woman save a child from some nefarious evil plot – and did so while being gay.

I was terrified to answer any questions about the book when I gave it back to her. I don’t recall what I said when she asked me if I liked it. It was a defining moment for me as a gay kid. Here was someone like me represented in a fictional world for the first time.

It seems like such a small thing now, but the impact was incredible back then. That I ended up having my first boy kiss later that year was in no small part built on that tiny shred of confidence I’d gained from reading that book.

With gay suicide awareness making headlines recently, I saw something on Facebook that illustrated this point far stronger than my own experience. Take a second and watch this youtube submission to the “It Gets Better Project” – though I should warn you to keep a handkerchief handy. I’ll wait for you to come back after.

See? I’ve had the pleasure of meeting Michael Thomas Ford at the Saints and Sinners Literary Festival in New Orleans, and I can only imagine the impact of this video on him. Books have power – I daresay if you’re reading this you’re likely in agreement with me – and sometimes I think we forget how much good we might do with them.

We’re represented out there a lot more than we were. There were no Kurt Hummels on television when I was young. I cannot believe some of the amazing things I hear from people about high school gay-straight alliances. It’s fantastic. It’s also urban. Those far flung rural areas like where I first encountered that gay character don’t have high speed internet access. They don’t have youtube.

But they usually have a library.

I wonder if there’s not a way to get those books and magazines and poems into the hands of more of those young people who need them – and I don’t think I’m overstating by using “need.” I think you need to see yourself represented in the world before you will believe you can – or should – be a part of it.

Those young adult books out there with gay characters – which I never found until after I was working in books and past my own young adult days – need to be where they were intended to be: in the hands of young adults. Teens and tweens are reading more than ever before. Teen fiction is one of the hottest markets out there right now – which means publishers are paying attention to it – and when I find a title that illustrates our existence in a positive light I’ll often take a moment and track down the author and thank them.

There are some fabulous young adult books out there, and more on the way – I’m personally itching to read Greg Herren’s SORCERESS later this month – and every one of them has that potential to be in the right hands at the right time.

Here you are, right on the page, says the book. You’re okay. Do you remember the first time that happened to you?

When I’m flush, a copy or two of these awesome teen and tween books will also usually end up in my local library, where I hope they end up in the hands of one of those young adults who happens to be feeling like they’ve got no place in the world. After all, I’m an adult now. What adult doesn’t enjoy proving to a teenager that they’re not right about everything?