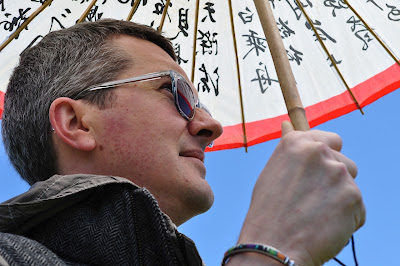 Andrew Demcak is an award-winning poet and novelist whose work has been widely published and anthologized both in print and on-line, and whose books have been featured at Verse Daily, The Lambda Literary Foundation, The Best American Poetry blog, and Oranges & Sardines. His fourth book of poetry, Night Chant, was published by Lethe Press, 2011. His other poetry books are A Single Hurt Color, GOSS 183::Casa Menendez Press, 2010, Zero Summer, BlazeVOX [Books], NY, 2009 and his first poetry book, Catching Tigers in Red Weather, three candles press, 2007, that was selected by Joan Larkin to win the Three Candles Press Open Book Award.
Jory Mickelson: The first poem I read by you was your e-chapbook “Pink Narcissus.”  It references an experimental gay film by the same title.  I saw this lush and hypnotic film for the first time at the Hide/Seek show in   Where and when did you first encounter “Pink Narcissus” and how did your chapbook grow out of that experience?
Andrew Demcak: Hmmm.  I’m not sure where I first heard about the film, “Pink Narcissus,” but I rented it from Netflix, loved it, and then asked for the DVD for Xmas.  The over-saturated colors, the dreamy quality of the 16mm film stock, the sexy Bobby Kendall, and the paper butterfly beguiled me.  I really wanted to write something about it.  It kept nagging at me, but the idea hadn’t gelled yet.
About the same time, I purchased my buddy Matthew Hittinger’s fantastic chapbook Narcissus Resists (GOSS183/MiPoesias, 2009) which has a poem that references the film “Pink Narcissus” in it.  It really urged me to create something.  I thought, “I’ve wanted to write a about Pink Narcissus.  I must do it – Right now!”  And so I did.
Then I approached Didi Menendez (the super genius creator/editor of MiPoesias, Ocho, Poets & Artists magazines, among many other projects) since her publishing house put out Hittinger’s chapbook.  I thought, maybe she’d want to produce a companion piece, an echo of Narcissus Resists?  I also wanted to dedicate the chapbook to Matthew since his poem was my prompting.  He is such a wonderful poet and a gracious man, too.  Didi loved the piece and agreed to put it together as an e-chapbook with accompanying audio of me reading the poem.  How digital!  Of course, the end product literally speaks for itself.  I love the fact that the chapbook is so very, very pink!  Here’s the link to the Issuu.com version of Pink Narcissus (GOSS183/MiPoesias) by Andrew Demcak.
JM: I have been turning over the phrase “paper butterfly” in my mind.  Poetry might have some of that, the ability for a single page to suspend you, to hover you in another space momentarily.  Where did poetry begin for you?
AD: My parents started it.  They love word play and puns, patter songs from Gilbert & Sullivan.  I grew up in language.  Then, in Wonderland and Shel Silverstein.  Free-To-Be-You-And-Me with Marlo Thomas, the stories, poems, and songs. The rhymes from Maurice Sendak’s Nutshell Library books.  I remember Sharon Olds, at a retreat she hosted I attended at The Esalen Institute, talking about her poetic rhythm coming from a childhood Protestant hymnal.  I think it’s the earliest exposure to language and its properties that starts it. At least, for me it did.

JM:  I can see how a protestant hymnal could give rhythm.  The King James Bible’s diction has inspired and informed many poets with its cadence.  Most recently, I am thinking about a poem by Joe Wilkins on Slate titled, “The Gospel According to Kelly, Night-Shift Manager, Fuel & Foods.”  I know that your new collection of poems, Night Chant tends to have some very formal elements.  How did this come about?