This weekend has been filled with a small accretion of idea bits and fragments, that have sort of reached a critical mass in my head.  If my mind were a junk drawer, it would be time to clean it out.

One thing that struck me this weekend was my tendency to pick up old books, even if I may never read them.  A great example of this is a book I got first published in 1939 called Cowboy Dances: A Collection of Western Square Dances by Lloyd Shaw.  This book is filled not only with photos of the dancers, but diagrams for dancing groups and a whole commentary on what music may be appropriate to listen to.  More intriguing is that the foreword is written by Sherwood Anderson, the author of the novel Winesburg, Ohio.

On Saturday, at the Farmer’s Market, I saw a half dozen elderly couples square dancing.  It is one thing that I have always wanted to learn, but never gotten around to.  Do young people square dance these days?  Perhaps buying older books on subjects that intrigue me is one way to give form to my countless aspirations. 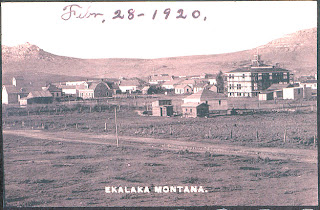 Right now, my friend is taking her elderly father through  Montana on his “last tour.”  At the age of 88, she doesn’t think that he will be able to make another foray into the Big Sky State where he spent the first half of his life.  She said that they were stopped in Ekalaka, Montana which is a town that nearly touches the divide between North and South Dakota.  I went to another book that I have to learn a little bit more about where they were at.  In Montana Place Names from Alzada to Zortman published by the Montana Historical Society, I learned that Ekalaka is named for the niece of the Oglala Sioux chief Red Cloud.  She and her husband opened a store and saloon there in 1885.  The town is currently a whopping 410 people.

Over the weekend, I stopped at the small town of Garfield, Washington in hopes of eating at a BBQ joint and cafe run by an elderly couple.  I haven’t been up that way in about five months.  When I arrived, the place was closed.  Instead, I ate at Grumpy’s Bar and was told by the woman at the counter that the elderly woman was ill and her husband spent a great deal of time taking care of her so the restaurant folded.  Another place that I enjoyed visiting has faded off the map.

This morning I drank my coffee out of a cup I bought from the Steamboat Rock Restaurant in Grand Coulee, Washington this summer.  It was perhaps the ideal small cafe.  The woman who was our waitress had worked there for 36 years.  The decor was replete with wagon wheels and knotty pine paneling.  It probably hadn’t been remodeled since 1960, and this was a positive thing.  Although things looked worn, they were spotless.  I bought a cup at the counter, because I know that someday soon, this place will probably also slip into history.

And that is what this post is really about: the way that life continues to slip into the past.

How elusive our points of reference can be.  Memory too continues to shift inside of us.  My recollection of the ham and egg sandwich I ate at the Steamboat Rock Restaurant will continue to haunt, even though it was perhaps the aura of the place that charmed me.  I begin to long for such things, especially when faced with the fact that I will most likely not be back to that part of Washington for years, if at all.

And this is where writing comes in, at the end.  Through writing, I am able to capture if not the actual moment, at least a texture of it.  If not the exact shape, then at least I can sketch its gesture in words.

Writing, can sustain us, even if all else recedes