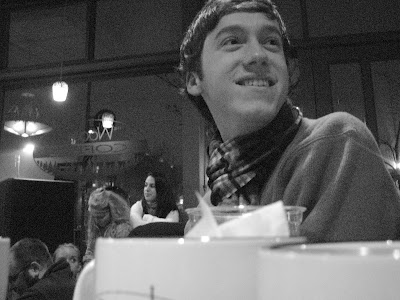 David K Wheeler is the author of Contingency Plans: Poems, from TS Poetry Press, and the album There There. He writes for two web magazines: The High Calling and Burnside Writers Collective. His essays have been featured at The Morning News, as well as in The Pacific Northwest Reader, an essay collection from Harper/Delphinium.

On Sound and Vision

Closing their 2003 offering, One Bedroom, post-rock quartet the Sea and Cake covers one of few singles from the first of David Bowie’s Berlin trilogy albums, Low. All things considered, their version of “Sound & Vision” remains fairly true to the original. Such unabashed homage, I don’t often gravitate toward in a cover. If I wanted something so straightforward, I’d listen to the original. However, it is plain to see that the Sea and Cake is much indebted to Bowie and his Berlin collaborator, Brian Eno; half of the band’s sound is comprised of synthesizers and uncommon percussion. At the time of Low’s production, grounding an entire rock project in synthesizers was certainly not taken seriously, if not altogether unheard of. The sonic experimentation that resulted in not only the (eventually) critically acclaimed Low, but “Heroes” and Lodger as well, was a revolutionary move for any musician, particularly one so iconic.

I must have surprised a friend after reading a poem called “Sound & Vision,” as unabashed homage as the final track on One Bedroom.

“I don’t think I’d caught onto your Bowie obsession before,” this friend commented, clearly forgetting Halloween 2007, when I dressed as Ziggy Stardust, circa 1973, Aladdin Sane. (To my dismay, the Will Ferrell / Jon Heder romp Blades of Glory released the same year, so I spent most of that night mistaken for a figure skater.)

Let me set aside, for the moment, David Bowie’s severe cocaine addiction at the time, and Low’s permeated sense of despair and “depiction, possibly a glamorization, of the kind of speed psychosis,” as Charles Schaar Murray of NME (New Musical Express) is reported saying in Marc Spitz’s relentlessly fascinating biography of the man, simply called Bowie. “Sound & Vision,” to me, presents as crucially self-aware for an artist who managed to shift both the look and the sonic landscape of rock ’n roll throughout his forty-plus years making music. Centered on Side A of Low, dead-center in his catalog of 23 LP’s, “Sound & Vision,” in the meta-narrative of the Bowie myth, acts as the concept around which ever other piece orbits.

Such a simple question he poses, Don’t you wonder sometimes / about sound and vision? seems almost rhetorical, as though he were seated in a workshop, peculiar spectacles whirring and buzzing about himself, the tinkerer. I want to answer, as both my hearing and my sight aren’t exactly up to snuff. In the poem, I rock out my eardrums at electronica shows and lament my steadily declining vision, and eventually concede I don’t know “whom I might blame but / myself for / losing both.” It’s no speed psychosis, but if I’ve learned anything from the Thin White Duke, it’s nothing good about blow in the long run.

In one of the earliest vignettes of the Bowie mythology via rock journalist Marc Spitz, George Underwood, a childhood friend, socked then-fourteen-year-old David Jones a good one over a girl for whom they’d both fallen hard. That punch would be the first of many alterations to the iconic Bowie look. This one permanent. Underwood caught David right in the eye, forever leaving it unable to dilate or contract.

I’ve always wondered about that eye, what it is he sees. Spitz calls it “oracular”; I’m not inclined to argue. What I will say is Bowie proves the human capacity to sublimate, to transform flaws into magnificence, because, in the end, he is just one man, imperfect and tragic at times. Still, both his sound and his vision remain unparalleled, inspiring me to assess my own flaws a bit closer. So when I open my poem with, “Everything I could want to know / I learned from David Bowie,” in a sense, I am asking, myself mostly, a simple, almost rhetorical question: Don’t you wonder sometimes?

(P.S. If you want to see Dave’s photo as Bowie, you will have to friend him on Facebook.)