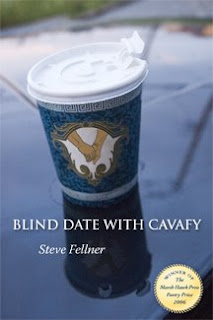 Fellner’s work can intimidate because they require the reader to know a bit about Cavafy, Catullus, Socrates and Li Po. The largest barrier to the average reader of Blind Date with Cavafy is the knowledge base needed to get the joke. This collection of poems was written by an English major with sass.

I admit it, these poems intimidated me. If they were people, each would be better read, wittier and dressed in more expensive clothes than me. Sometimes I wasn’t sure if the poems in Blind Date were telling a joke or making one at my expense. And that’s okay, because Fellner’s cleverness isn’t a one line zinger repeated over and over again.

His poems are original and often surprising. The descriptive language in “Synesthesia,” a poem about a neurological condition that cross-wires the senses, is stunning: …friends begging him / to be ruthless about their new hairdos (The perfect cross / between the smell of burnt tapioca pudding and undercooked / pot roast)…

What I love most about Fellner’s work is that it has opinions. His poems don’t hesitate to tell the reader exactly what they think, but they manage to be loud without shouting. They are solid poems that work on the page without gimmick. Blind Date’s work doesn’t scream, “Look at me! Look at ME!” Instead, they approach the reader with an arched eyebrow and say, “Oh honey, you gotta see this shit to believe it.”

Blind Date with Cavafy was published by Marsh Hawk Press in 2007. This year, a book of poems by Randall Mann has been nominated for a Lambda Literary Award. The book’s title: Breakfast with Thom Gunn. I can’t help but wonder if Breakfast took its cues from Blind Date and if so, what Fellner’s poems have to say about that.