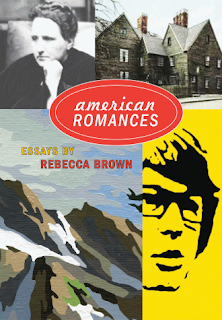 The first thing I noticed about American Romances was the blurb on the back covers by Thurston Moore, guitarist for Sonic Youth. So when I opened the book and saw quotes from Nathaniel Hawthorne’s work, I was surprised. For me, there was no connection between a “noise band” and the author of the Scarlet Letter. And this is how many of Rebecca Brown’s wonderful essays unfolded as I read them: startling connections between disparate elements, musings on cinematic characters and imagined encounters with historical figures.

In Brown’s opening essay “Hawthorne,” she weaves the author’s life with that of Brian Wilson, one of the Beach Boys. (He grew up in a California suburb called Hawthorne.) Brown takes details from both of the men’s lives and builds surprising parallel narratives. “Brian wrote a string of hits. He was a native genius, American music’s answer to the sophisticated pop of the British Invasion.” And a paragraph later, “Nathaniel’s books were a string of hits, much-read and well-reviewed. He was revered at a time his countrymen were trying to create a particularly American Culture…distinct from the English and European models they’d been handed.”

Another essay “A Child of Her Time,” examines the truth of memory against the factual truth. Brown weaves her own personal history in and out of the life of Laura Ingalls Wilder. And then there are the footnotes. Footnote 2 to this essay offers a commentary that undermines the point she makes in the body. Footnote 4 becomes its own essay examining the characters of Hawthorne’s corpus, offering yet another theme to run along-side the author’s own childhood.

Brown uses footnotes liberally and with great skill, but not in any traditional way. The footnotes in American Romances create complex dialogues between the main essay and the additional information. Footnotes are used as exposition, as side trips through history or to create contrary voices.

My favorite essay in the collection is “Invisible,” which gives the cinematic history of the Invisible Man and/or Woman. Footnote 5 is longer than the entire essay. In fact, the real story of “Invisible” is told through the footnotes. To read the meaning in full is to peel back the surface layer and delve into the hidden commentary put at the end.

American Romances is 162 pages of startling turns, subversion and literary sleight of hand. Brown manages to confound and delight without an ounce of arrogance or elitism. Rather, these essays are a kind of nonfiction chutes and ladders. One cannot predict where these essays will arrive, but the ride is enjoyable.