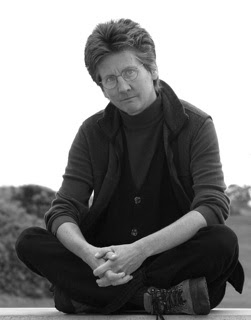 Rebecca Brown’s twelfth book, American Romances, a collection of gonzo “essays,” was released by City Lights in June, 2009. Brown’s other titles include The Last Time I Saw You, The End of Youth, The Dogs, The Terrible (all with City Lights), Excerpts From a Family Medical Dictionary (Granta and U of Wisconsin) and The Gifts of the Body (HarperCollins). A frequent collaborator, she has written numerous texts for dance; a play, The Toaster; and Woman in Ill Fitting Wig, a book length collaboration with painter Nancy Kiefer. Her work has been translated into Japanese, German, Italian, Norwegian and Dutch. She recently co-edited, with Mary Jane Knecht, Looking Together: Writers on Art (University of Washington Press), an anthology of writers’ responses to work at the Frye Art Museum. She lives in Seattle and teaches at the low residency MFA program at Goddard College in Vermont and elsewhere. Her work is included in the Norton Anthology of Literature by Women, The Penguin Book of Lesbian short Stories and lots of other places.

Jory Mickelson: Tell me how your newest book American Romances came together.

Rebecca Brown: I am calling them essays. They are part fantasy, speculation, silliness and research. I’ve done journalism off and on. Writing nonfiction is also something I have done for a number of years, which is one source. I also did a series of lectures with the Seattle Opera and that turned out both literary and campy. I enjoyed those. A third source for the collection was that I was a teacher for twenty five years where I taught Hawthorne, Stein, etc. I have all of this stuff to work with from teaching.

In The Last Time I Saw You, I wrote about aspects of E. M. Forrester, his fantasy love life and my own affairs, which were coded. Writing American Romances followed a similar pattern.

With this kind of writing I get the pleasure of engaging literary and historical figures. I get to write toward or away from other people. Essays also allow me to indulge my pop culture obsessions. I can say that watching all of these Western movies isn’t a waste of time because I am going to write an essay about it.

JM: You have been writing for more than two decades. In that time, how has your work changed?

RB: One constant in my work is that I have always been very careful aesthetically. I am constantly revising my work. Writing is always hard for me. It always comes slowly. Another constant is that my work is emotionally engaging. At least I hope it is!

The differences? I think that my first book of stories Evolution of Darkness, (published in England in 1984 and in the U.S. in 1992) was written with a very clear “I” directed to “You.” It was a very direct, emotional address. I still do those things, but it used to only be from that “how could you do this to me” place. Recently my writing examines how I have been complicit in my own fate, the “how could I have done this to myself?” It is less about the “I” and more about the “I and others.”

I now write about the pressures on the figure of American masculinity—not just about my dad.

There is a whole history of queer people finding one another in odd places, not just my own relationships. I am writing toward other people now. I hope that I am reaching out and making connection with something larger than myself or my life.

JM: In your essay “Invisible” your footnote becomes its own essay. Can you tell me about your extensive use of footnotes in American Romances?

RB: This is the first time that I used deliberate footnotes throughout a collection of essays. The essay “Invisible” is shorter than the footnotes it uses. The real story is hidden. The footnotes become the real story.

People think that they can skip over them, just like queer people’s lives are often skipped over. Our story and the important story of “Invisible” are in the footnotes.

JM: Footnote 4 in “Invisible” talks about progress and forgetfulness. I have thought a lot about what progress means to queer culture. I get the impression that many younger queer people think that there was the Stonewall Riots and now we are fighting for gay marriage. That’s it. That is our history.

RB: I think the passage you mean is:

“Maybe this kind of forgetting is not that different form girls today saying ‘I’m not a feminist, I just want to be a lawyer,’ unaware that a generation ago not many girls were able to go to law school. Is this progress, when things change so much you forget they ever were different?”

Maybe that is what progress really is, when one’s oppression is lifted to the degree to where it no longer happens. Is that progress or is that fucking terrifying?

Is a young girl thinking that she is not a feminist, just a lawyer similar to straight college students naively thinking that we are all okay and all the same? Does that just cover things up? Is it better to have it out in the open and be called a dyke or a fucking faggot instead?

I remember being the first out lesbian in the state arts commission. There were tons of closeted lesbians on the art commission at the time. The question you have to ask yourself over time is are you going to be bitter about it or is it progress that there are out lesbians all over the place now, that being a lesbian is no big deal.

Does victory mean that you have forgotten your history? It is fucked up. But I don’t want to sound like very generation before me though, “In my day…”

JM: How do you think that queer literature has changed in the past three decades?

RB: I think that there is more hope now. We are in a really exciting era now, full of experimentation. It used to be all straightforward, social realist stuff, “Become a lesbian and you will be a good person.” I think we are getting past that now. We know that it was propaganda, like Communist literature.

Don’t get me wrong, every movement needs to go through that stage. But now we can have writing that doesn’t fit into any one category. There is a lot more aesthetic experimentation.

One trend I don’t like is the, “I don’t think of myself as a queer writer” thing. I think there is a strong feeling that writers don’t want to be ghettoized anymore. That somehow gayness doesn’t matter, but it does.

All writers write from their perspective. Our writing comes from our center, just like our sexuality. It isn’t progress to say that we are all in a melting pot. That’s just dangerous.

I think that there is more interesting experimentation going on these days as queer literature matures. Brian Teare a gay poet from San Francisco for one. Another is Kathleen Bryson and her book, Girl on a Stick. That book is fucking wild.

There is also a lot more stuff from transsexuals, and I don’t mean the gender theory crap, but people writing from their own experiences. Kari Edwards wrote poetry and prose, between forms. It is both politically aware and aesthetically daring. She couldn’t exist forty years ago. Her poetry engages people. It comes directly from her queerness. There is no getting around that.


JM: What do you find discouraging about current queer culture?

RB: Some of the assimilationist stuff. We aren’t all exactly alike. I think “that is easy for you to say” and roll my eyes. I don’t like the taming of queer culture. As if because everyone loves Ellen DeGeneres, everyone loves lesbians, problem solved. Why don’t we get a little bit more out there maybe?

I mean I love the fact that there is an out lesbian talk show host that everyone likes. But that is like saying that if everyone likes Colin Powell, that racism is over.

If we have Ellen on TV then there are no problems with lesbian visibility. We know that isn’t true. I think that this kind of thinking or solution is a band aid that allows the problem to grow worse. On one hand, who would have ever thought that there would be an out lesbian talk show host to begin with? But I don’t want things to stop there.


JM: What are you working on currently?

RB: Writing continues to be very hard. I started a personal essay about someone I knew in the 70s thinking that it would be easy, but it has been absolutely hellacious. In the past few years I have been collaborating with visual artists. I did that anthology for the Frye Museum. I would like to do more of that.

I never know what’s next. It is like those useless questions on grant applications, “What are you going to do with this grant money?” I always want to say, “I don’t fucking know. I am going to live off the money while I write!”

If you would like to see Rebecca read some of her new work you can catch her at the Richard Hugo House in Seattle on Friday, October 23rd, 2009, 7:30 PM.