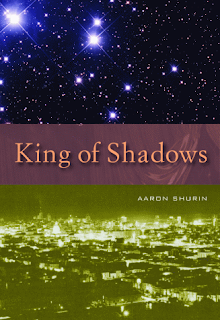 I discovered King of Shadows on a recent trip to San Francisco. Rooting through the shelves of City Lights Books, trying to limit the number of books I left the store with, I picked up Aaron Shurin’s collection of essays. Thankfully, King of Shadows seemed to contain a little bit of everything that I craved on one plate. I desired nonfiction that I could pick up and set down as needed. As well as to read about San Francisco—something both literary and queer if possible.

Shurin’s twenty-one essays range in topic from taking walks through San Francisco’s parks, the aesthetics of bars that no longer exist and a meditation on the flux of time and memory in connection to reading Proust.

The opening essay, “The Shrine,” had me at the very first sentence, “Birds are scary as shit, it’s as simple as that.” The piece unfolds into the author’s radical change of perception involving a minnow in 1967. In the space of eight pages, Shurin manages to not only encapsulate much of his personality, but also make the reader eager to plunge deeper into the book. It closes with the masterful sentence, “I swore to the Self-Realization Fellowship Church of All Religions that I would change fast—and history saw to it that I did.”

Shurin has a sharp eye and nose. His prose is always aware of its setting. Perhaps this is because Shurin is also a poet; words manage to be concrete and abstract all at once. In the essay, “Dahlias” he describes the scent of an odorless flower, “…next to nothing, but not nothing. The hint of hay that chrysanthemums give off. A light broth of cellulose and sun.”

In fact, it’s these wonderful leaps that makes reading Shurin so enjoyable. He constantly disparate ties ideas and subjects together that surprise. Everyday vignettes take on magical qualities through evocative prose. “Three Scenes from the Sauna at the YMCA” paints an older gay man ogling men at the gym in a new way, “He carries a smile on that divination—it’s projection—he sees what he wants to see—there are suggestions and outlines—nobody else can see him he’s blown away riding a wind or a current of remembered sex—”

Perhaps one of my favorite essays in the collection is “Reading in Time, Reading in Place.” Here Shurin explores the relationship between the landscape and what you are reading in that landscape. He says that his own memory of a book is inextricably tied to where he was and who he was at the time he read it. As a bibliophile, I find this concept to be true. I am unable to separate my memory of reading about a devastating Montana blizzard in Judy Blunt’s Breaking Clean with my memory of reading it poolside in Maui, in December. The irony was not lost on me then or now.

Frank observation, wry commentary tipping toward despair or gratitude and humor are all features of King of Shadows. This collection of essays brings us to the center of life, often complex and contradictory, but never fails to place our hand on the humming, radiant thread that shoots through the weave.