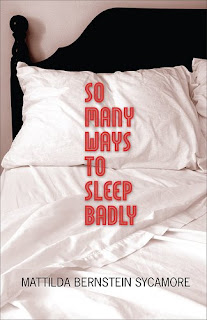 Paperback: 256 pages
From City Lights Publishers
(September 1, 2008)
ISBN: 978-0872864689
When I began reading So Many Ways to Sleep Badly, I didn’t know what I was getting myself into. I knew that the book had been called “experimental” and that its publisher City Lights Books had a reputation for publishing avant-garde work. Words like “ground-breaking” usually warn me that the book has already dug its own grave. This is not the case with So Many Ways to Sleep Badly (SMWtSB).
This book is filled with sound. The city of San Francisco and the life of the narrator vibrate with the noises that surround him: the shuttle of the BART, people yelling in the streets, the scuttle of mice and roaches, and NPR in the background. In fact, many stories and news reports from NPR are woven into the text of SMWtSB. They serve as reference points for time and place. Mattilda’s attention to the sound of her book should be noted as well.
Too often with stream-of-consciousness work and genre-breaking literature, language is sacrificed for the idea. Not so with SMWtSB. Mattilda’s ear is constantly tuned into the sound and rhythm of her words, and they sound lovely. “The soundtrack of my destiny is just shake and break, take those steps every step counts. Feeling every beat, cold hands but honey oh the heat, the heat.”
Yes, yes, but what is the book about? SMWtSB is the narrative of one person’s struggle to survive in an increasingly expensive and alienating city (San Francisco.) As our hero’s body breaks down from fibromyalgia and insomnia, he tries to break down the barriers of contemporary queer culture and his own emotional blocks. Oh yes, there is romance. And yes, there is a lot of sex.
Our hero supports himself as a sex worker, but the book isn’t a collection of one-john-after-another stories. He has sex with his boyfriend. He has sex with people who are neither his clients nor his boyfriend. Though our hero may feel hopeless about sex sometimes, even swearing it off, he never loses his sense of humor. “I go to a trick, guess he’s in another world because no one answers the door. Of course I take a cab home—Rue says I turn tricks to pay for my taxi habit, but see—I proved him wrong: I don’t even turn tricks.”
Gender is fluid in this work. The pronouns of the characters shift from sentence to sentence and often the names do not clearly define boy/girl. The plot is fluid as well. It skips, leaps, tumbles, and saunters. Each chapter is solid enough to stand by itself, or be read chronologically (or out of order for that matter). It can get confusing at times, but it is always beautiful, even at its most vulnerable and grieving—especially then.
SMWtSB is a serious book. It deals with incest, drug abuse, alienation, and national imperialism. It wrestles with questions about love and connection to others. Our hero constantly confronts, provokes, and interrogates his/her life, but does not give us answers. Like life, Mattilda’s book doesn’t end with a big red bow to tie all of the loose ends together. So Many Ways to Sleep Badly is a hard ride to take, but one that you won’t want to miss.
Posted in fiction, mattilda bernstein sycamore, review, so many ways to sleep badly.