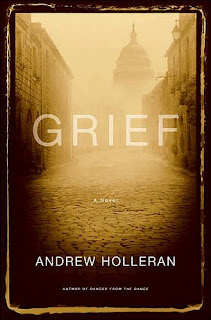 “She was no longer wrestling with grief, but could sit down with it as a lasting companion and make it a sharer in her thoughts.”

Grief by Andrew Holleran is a quiet one hundred and fifty pages of reading. Entering into this book’s pages is akin to departing a busy city street for the stillness of an empty art gallery or a hushed library. The outside world grows dim and fades with Holleran’s beautiful prose.

The narrator of the book, whose name we never learn, arrives in Washington D.C. after the death of his elderly mother. He rents a room in a large house near Dupont Circle and teaches a university course on AIDS literature for a single quarter or semester. None of the characters are named, except for the narrator’s friend Frank, a cancer survivor. The other characters are defined in relation to the narrator: the landlord, the downstairs neighbor, the downstairs neighbor’s boyfriend. Perhaps a large portion of this book’s internal stillness comes from the unnamed people who populate it.

The narrator finds a book in his room, “Mary Todd Lincoln: Her Life and Letters” by Justin Turner and Linda Levitt. It chronicles Mrs. Lincoln’s endless mourning for her assassinated husband. There is a beautiful parallel between the narrator’s own grief and the letters of Mrs. Lincoln. You can’t miss it, but it is done like everything else in this book, with a gentle hand. The narrator spends his time teaching, speaking to his friend Frank, reading and walking about Washington D.C.

A reader may wonder where the story is going, but what it lacks in plot it makes up for in depth and breadth. The narrator is filled with both grief and guilt. These emotions play out on numerous levels in him and through the actions of other characters in the book, even the landlord’s dog becomes a kind of object lesson in loss. (I promise the dog doesn’t die.) As Holleran writes, “When some terrible misfortune happens it’s not just the victim who suffers. There’s a ripple effect. Everyone around the victim is affected.”

If Holleran’s novel were a classical piece of music, it could be Bach’s Goldberg Variations. This book is a meditation on differing types of grief, longing, and mourning. The narrator explores his feelings about his mother and the loss of so many gay men to the AIDS epidemic, and the loss of his youth. More than just the loss of friends and family Grief addresses the loss of youth, looks, and sexual appeal that comes with aging. The narrator and his landlord are in their mid-fifties and discuss their growing inability to attract the younger men they are still attracted to. Grief is also a frank look at gay middle-age.

I am hesitant to read any book with “grief” in its title. I feared that I would be settling into a book about clinical depression or myopic hopelessness. Thankfully, that wasn’t the case. At the center of Holleran’s shining and elegant prose are a quiet hope and the belief in human endurance. Holleran’s book is a slow descent to the shining bottom of what makes us human.