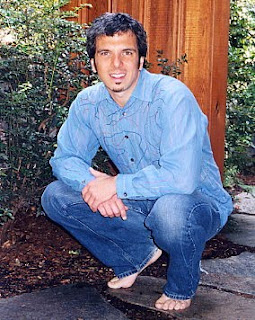 Marc Acito’s is a full time writer who live in Portland, OR. He is the author of How I Paid for College: A Novel of Sex, Theft, Friendship and Musical Theater and Attack of the Theater People. A former opera singer, he is now a regular commentator on National Public Radio’s All Things Considered. To learn more about Marc, you can visit his blog at http://marcacito.blogspot.com/

This interview was conducted in October of 2008

Jory Mickelson: How did you come to writing, or being an author?

Marc Acito: I was one of those writers who refused the call. I flirted with writing in college, but became an opera singer. I had a rather mediocre career singing. I played comic roles in the Seattle Opera: drunks, dwarves, court jesters, mad scientists. I wanted to create my own art instead of performing other people’s work. At 30, I began writing to create my own art.

I was self taught. I was a drama major in college with a music and art minor. Theater taught me a lot about the decisions I make as an author. I learned how to create characters, direct a scene, and build a plot. I began freelancing for the gay press, Just Out, which is Portland’s gay paper. I drew cartoons and then covered a story on a visiting opera singer. The paper was so pleased with the article that I started doing more writing. I eventually had a self-syndicated humor column in 19 papers over a four-year period. I am now the author of two published books and one play. The books are the result of stillborn plays and my play, Holidazed, which is at the Artists Repertory Theater in Portland, was the result of a failed novel. I have been a full time writer for five years now. I do freelance work and am a sometime commentator for NPR’s “All Things Considered.”

JM: Why do you write? What compels you to sit in a chair everyday and do this work?

MA: That is a great question! I have been giving interviews for four years now and no one has asked me that questions. The simple answer is that I write because I have to. I feel a need to make sense out of the random and chaotic world that we live in. I guess the more complex answer is that I write things the way I feel they should happen. I try to write and live my life as if it were a screwball comedy. I felt that I was in a rut this year, so I started a blog project where I would try something new every single day and write about it.

JM: What is the most frustrating thing to you about the writing process?

MA: The hardest thing for me about the writing life is publishing. I am not the captain of my own fate with publishing. As an author, I call the shots and make decide all of my characters’ fates. Right now, there is a large media conglomerate making decisions about my life. The movie rights for my first book have been in the works for five years. There is nothing I can do about it and that makes me frustrated. All I can do is write something new.

JM: In your opinion, what is the state of queer literature these days?

MA: I am concerned about the state of literature. Period. People don’t fucking read! That is the big issue. The number of readers goes down every year. Sure, we all read on the Internet, but largely, we are moving away from a culture that values words.

I don’t know about the state of queer literature. I have been surprised at the number of gay men who don’t read regularly. I thought we read a lot more. I find that shocking. We are supposed to be the vanguard of all things cultural and no one is reading. There are many great queer writers, but the reception they are receiving is an open-ended question.

Queer publishing is something that I have avoided. I strive for a crossover audience. I want to reach beyond the gay audience, although a great number of my fans are gay men and the women who love them. There are pros and cons for focusing on a specific audience. I wrote about a specific subculture, being in a high school musical. I wanted to share that world with those who had experienced it. I also wanted be a tour guide for those who hadn’t gone through it.

JM: What books or stories have been influential to your own work?

MA: I think that my own work blends the genres of my two favorite authors: Christopher Isherwood and Agatha Christie. Isherwood wrote quasi-autobiographical work. He wrote exclusively for a gay audience and was a master at character studies. Agatha Christie wrote corkscrew tight social mysteries.

Another book I love is Joe Keenan’s Blue Heaven. He is a very funny writer and was hugely influential to me. After reading his work, I really wanted to write a book like that. Let’s see, The Bridget Jones’s Diary by Helen Fielding was also good. I would characterize this style of writing as first person neurotic. I want to write farces with heart.

JM: What is next for you?

MA: I am working on part three of the Theater People trilogy. I also want to write another play. I will keep writing for the theater if I can. I also teach-I just finished teaching some workshops at Write on the Sound Writer’s Conference, in Edmonds, WA. I also continue to freelance as a commentator for “All Things Considered.”