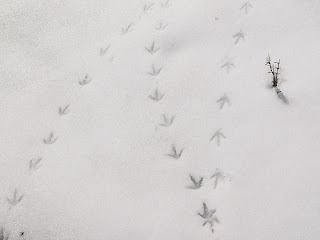 Second year MFA candidates read from their work at what people at the University of Idaho call a “symposium.” It is a chance for writers to showcase their work and share just what they are up to in their writing lives. After reading, students are asked questions about the pieces. There is also a potluck style meal and drinking.

Last night three students read from their work. Mary Morgan read her nonfiction essay inspired by Susan Sontag’s “Notes on Camp.” She composed fifty-two notes attempting to define or distinguish was made an essay, well an essay.

In the piece, I observed that she set up a very clear dichotomy between herself as a writer and essayist and the people she interacted with. People in bars, mutual partygoers, clerks in bookstores and even her husband “didn’t get it.” The essay appeared to be an attempt to answer the question they all asked her: well what exactly are you writing?

I asked Morgan about this dichotomy. Whom is the essay intended for? Why is there such a divide in the piece? Is your audience the same people who give you perplexed looks when you say you write creative nonfiction?

As a poet and writer myself, I know that all writers consider their audience. This concern extends beyond “How do I market this?” or “Who is likely to publish this?” The real question is who is going to read this and ultimately, “Will my work last beyond myself?”

Being a writer and explaining what you do can be mildly frustrating on the best of days. There is a sinking feeling in my heart much of the time that the nonwriter will “never really get” what I am up to. Even close to home. My partner isn’t a writer. He doesn’t read much beyond magazines, the newspaper and things from the internet. The statistic that one in four Americans didn’t read a book has come home to roost on the pillow next to me. (I am actually outnumbered in my home because the cat did not read a book last year either.)

Sometimes we fight about reading and writing. He has told me, “Your blogging is like me entering contests on the computer.” He has also said, “Writing is good for you, everyone needs a hobby.” What he fails to see and I often fail to explain in a nonhysterical manner is that my blog has something to do with me being a professional writer and that my hobby is more something far more serious.

I don’t know how to tell my partner that writing is in my hardwiring.

I cannot illustrate my obsession, my NEED to put words on a page and rearrange them to him in a clear fashion. He landscapes, but he does not get angry if he is not able to put a bulb in the ground. He enjoys watching action films, but he won’t feel as though there is a bomb going off in his chest if he doesn’t see a car chase once a week.

What I write is an extension of who I am. What I write and revise is an act, however clumsy, of creation. So I ask you this week, why do you write? Whom are you writing for and how do you explain it to others?

And for you nonwriters, I also saw some quail today in the snow. 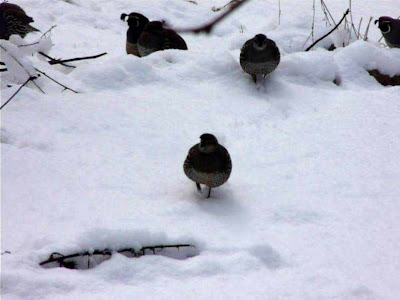