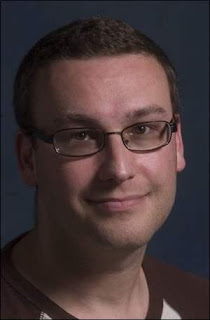 Steve Berman is a gay writer and editor who lives in New Jersey. He has edited several anthologies of gay men’s fiction, including Best Gay Stories 2008. His first novel, Vintage, A Ghost Story was a 2008 Finalist for the Andre Norton Award.

This interview was conducted in May of 2008.

Jory Mickelson: Tell me about how you got started writing and editing…

Steve Berman: I started writing as a teen. I sold my first story at seventeen. After I had sold several stories, I came up with an idea for an anthology. I wanted to put together an inspirational anthology for gay men. I contacted Toby Johnson, another writer, and our visions matched. Charmed Lives: Gay Spirit in Storytelling came out in 2006. It was a finalist for a Lambda Literary Award. It steamrolled and after that I started editing other anthologies.

JM: What are you currently working on?

SB: I am working on two books coming out in 2008. The first is Best Gay Stories 2008, which is an anthology of the best gay stories that were published in 2007. The second book is Wilde Stories 2008. It is a collection of the best gay fantasy, science fiction and horror stories from 2007.

I am also working on another young adult novel. It is set in the Victorian era and involves faeries. It is a gay historical fantasy. In August, a collection of my short stories is coming out, Second Thoughts: More Stories Queer and Weird.

JM: You sound busy, are you a full time writer?

SB: I have a regular nine to five job. I write human resource material for a consulting firm. I would never write full-time for myself. There are things you have to consider, health insurance for one.

JM: What are the best and the worst parts about the writing process?

SB: I love the challenge. When I am writing, I like it when I paint myself into a corner. Sometimes it doesn’t look like there is any way out or to move forward. My mind keeps working on it and then I finally figure it out. It is interesting to come up ways to solve problems that aren’t expected.

The hardest part for me is putting down the words initially. Sometimes it is very difficult to get them down and I just don’t mean when I am starting on a novel. Revising and tinkering with words after they are down is great. Expressing the initial ideas can be the hard part.

JM: What is your advice for writers, those starting out and those who have been writing for a while?

SB: For new writers, I would say, find out who you are on the page. Get a concept of your voice as an author. It takes time to figure out who you are. Be bold and try to convey as much of your own personality and perceptions on the page. Don’t just imitate someone else.

For those who have been writing for a while or have sold a few things, remember that writing is not a race. There are no prizes or winners. Don’t compare yourself to authors that are more successful. Focus on entertaining the reader. If you do this well, success will happen as a result of your writing.

JM: What are your views on gay literature in general?

SB: I think that it has become more accessible to people. You can get a queer themed book on Amazon.com and still be closeted. This is good for shy and introverted queer people as well. Having wide access to queer literature means that it is more likely to sell gay themes to a major publisher. Writing is still very commercial. A piece of writing needs to entertain or move people of any orientation, not just a gay and lesbian audience.

I am a little worried about print on demand. I own a print on demand site and know the pros and cons of the process. If you had a choice of schools, you wouldn’t send your child to one that had the least opportunities and no frills. A writer’s manuscript is their child.

JM: What are some of your own favorite books and writers?

SB: Swordspoint by Ellen Kushner is one. It is a fantasy novel with gay characters. Every gay writer should read it. You can learn a lot about what an author does by reading their books. This is one of the books that I envy.

I like quirky fantasy and Zod Wallop by William Spencer is a great book. It isn’t gay, but it is a perfect contemporary fantasy novel. If I ever wrote close to the level of these two books, I would be content.

JM: Do you have any last words?

SB: Yes. If you are a writer, the most important thing you can do is become part of a community of writers. Your connections become important. Writing is a lonely craft and being part of a community helps. Join a writing group or attend a conference. Saints and Sinners is a gay literature conference that is held every May in New Orleans.