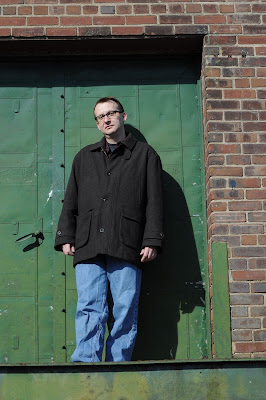 In April, New Village Press in Oakland published my anthology, American Tensions: Literature of Identity and the Search for Social Justice. This was another big project I’d been working on for the last couple of years, and again, it gave me something to focus on – if I was having trouble working on my own poetry, I could always turn to the anthology. It’s fantastic having the anthology out there. I’m very passionate about the power of literature to create change and advocate for justice, and I think the work in the anthology proves how work that is, first and foremost, of the highest quality usually possesses the power to change minds, to get the reader to see the world through other eyes. It was my desire, as a teacher, to find work that has the power to transform, but isn’t preachy or polemical, that made me undertake the project, and it was my belief that such work is out there that made me see it through to publication. I’d love to work on another anthology. It seems a shame not to, given the steep learning curve you face when you put together your first anthology. I’m sure I’ll do another such project.
I’m also tinkering with essays and some short nonfiction. I love reading essays and creative nonfiction, and I think there’s a deep connection between poetry and the essay form. Maybe it’s an associative approach to ideas and images, a way of looking at the world that allows you to put unlike things together in order to come up with something new and whole. I’m very taken with the work of W. G. Sebald. There’s something about the way he approaches ideas and narrative, a very liquid quality that allows him to move so effortlessly from one topic to the next, one memory to another – it’s just beautiful. When I read his work, and the work of other writers like him, I feel that there is hope for all of us – I’m grateful that there are minds out there so unhampered, so full of imagination that they make almost anything seem possible. There is so much pettiness in the world these days. It’s ugly and it’s exhausting. Writers like Sebald are working on another level, not denying this world, but seeing it within a greater context.
In terms of my own writing, I’m content to just write for now. I’ll send out work to journals, but won’t try to force myself to come up with the shape of a new collection yet. I know that this will come when I’m ready. I am a project kind of guy, when it gets right down to it. I guess my current project is just letting things be, seeing what happens next. Whatever the next collection is, it will need to be different from the last four. I’m not talking about radically changing my style or abandoning my voice, and I don’t honestly believe any of us can do that in any organic, real way. I’m talking about growing as a writer and a thinker, stepping off into new territory, and simply continuing to learn. I never want to stop learning. It’s how I know I’m alive.
JM:  Thanks for such a great conversation.
Posted in American Tensions, How To, identity politics, Marsden Hartley, Sin Eater, social justice, This Brightness, William Reichard.