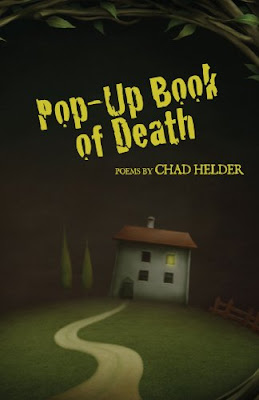 I have gotten to know Chad Helder in the past year through an interview and correspondence.  He was a guest blogger back in October as well.  If you have missed either of these or want to know more you can check them out here:

One thing becomes readily apparent when reading Helder’s poems; there aren’t a lot of people writing about the topics he covers.  Nightmares, horror films, repression, and suspense are the stock and trade of the Pop-Up Book of Death.  “Fear of Spiders,” “Fishtank Wolfman,” and “My Paperboy is a Vampire” are just some of the poems you will find within the shadowy covers of this book.  Although the tone of some of these poems are humorous, there is a great deal at stake.  Helder is earnest in the best sense of the word “something of value given by one person to another to bind a contract.”  And make no mistake, reading a book of poems is a kind of contract between the author and the audience.

The first seven poems in the book are exactly what the title promises, an imagined pop-up book.  My favorite things are the interactive portions in which the poem says “Pull the tab:” and then describes what actions follow.  These poems also have “A fun activity:” to try, such as “Bury a friend in the fetal position.”  They reveal not only the range of imagination that Helder possesses and his concision with imagery, but also the way in which he uses humor to talk about dark things.

I was surprised by  the number of poems involving dogs in this book.  I have to admit that I have a grudge against dog poems.  Billy Collins and Mark Doty write much good work, but they are perhaps the greatest sinners in regard to writing about man’s best friend.  Although Helder is sentimental about his dog, some of his poems surprise and even seem to violate the dog-poem conventions.  In “Ghost,” for example,  the speaker’s dog comes back to him from the dead.  In “A Boy and His Dog,” the speaker dresses up in a dog costume.  The dog becomes something else, “Her image, her symbol, the idea of the white dog / filters my secret.”

The secret is revealed in the poem “Instead” in which Helder comes into his stride.  One of the longer poems in the book, “Instead” acts as a map for how to read many of the others.  The idea of sexuality and monstrosity blur in many of the poems (as it often does in horror movies), yet “Instead” tells about an friendship ruined by budding sexuality in plain terms.  It opens with the lines “I wanted to be your best friend in the fifth grade, / your best friend and more.”  Later the poem continues:

But something mysterious
from beneath
began to gain
definition and momentum,
as threatening as
a whale breach, so I pushed it down,
and it sounded into the depth again,

The boy sublimates these feelings by getting a puppy because “a dog is much safer than a boy.”  I have yet to find coming of age poem, as a gay man, the resonates with me more than this one.

A little past half way through Pop-Up Book of Death  are three poems that stand out for their change in placement on the page and imagery.  “Undertow,” “The Rapids and the Raft,” and “Babel” appear to be the shuddering undead heart of this collection.  The language of these three poems is more lyric and abstract.  The narrative isn’t given neatly, but is scattered and broken.  I was so curious that I had to email Helder and ask about them.  As it turns out these three poems used to be part of a single “very long poem.”  They stand alone just fine, but their likeness in tone to one another is unmistakable.

There is something in this book for most readers.  The horror fan will finally find poetry that speaks to him or her.  A casual reader will be disarmed and drawn in by the use of humor.  Queer readers will find new representations of themselves.  In short, Pop-Up Book of Death is entertaining and uncomfortable at the same time.  It will stay with you just as long as your reoccurring dream about the man behind your bedroom door with the knife.