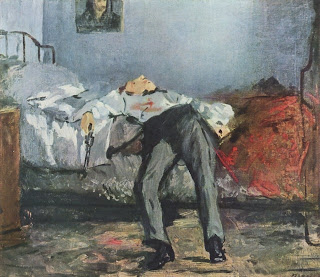 I keep thinking about the first season of RuPaul’s Drag Race and her constant admonition at the end of the show, “If you don’t love yourself how the hell are you gonna love someone else?”  I always found those words quixotic because they came on the heels of the judges eliminating a drag queen from the competition–usually with RuPaul as the final arbiter.  The world isn’t a fair place and it often doesn’t make sense.

I keep thinking about what RuPaul has to say in relation to the recent national media attention to gay teen suicides.  This isn’t a new problem.  This isn’t even an increasing problem.  The national media and straight America is just now becoming aware of what many queer people have known for a long time–being an LGBT junior high or highs school student is incredibly hard.  Even   if you aren’t aware of your sexuality yet, even if you aren’t really queer–once you get branded as a “Faggot” or “Dyke” by your classmates it sticks with you.  There is no escaping the names, the taunting, the intimidation, the bullying, the harassment and the violence that comes with being queer.

Growing up in a rural Montana town, I didn’t have access to LGBT resources or culture.  In my high school, there were books about homosexuality in the library card catalogue, but the books were not on the shelves.  I checked.  Repeatedly.  The books were kept behind the counter and you had to ask the adult librarian to check them out.  She was an intimidating woman.  My parents worked at the school I attended.  I never asked her for the books.

I tried to come out to a school guidance counselor.  By my senior year I knew that I was gay and it was tearing me apart inside not to be able to talk about it or tell anyone.  I didn’t expect to find a boyfriend in high school; I was desperate to be honest about myself with someone.  Anyone.  Even the guidance counselor.  I was told “Why don’t you just wait to deal with that until college.”  College was years and miles away.  There was no place for me at home or at school.

There was one gay student at my high school.  He transferred in from a bigger city.  He got harassed and beat up several times.  He went to the principal of the school and to the superintendent.  He was told, “You invite it on yourself.  If you are going to flaunt your sexuality, expect to be beat up.”  That was my school’s solution to creating a safe learning environment.  The student transferred to another school.  Then it was just me.

When I graduated from high school and went to college, things got harder for me.  I didn’t meet any queer people.  I got beat up.  I was fired from a job for being gay.  I ended up dropping out of school.  I had been waiting to deal with being gay for two years.  I was at college and thing were infinitely worse for me.

I am glad that the Internet is helping to get the word out about queer youth suicide.  I am pleased to see national media, which has dismissed queer youth for so long, finally take notice.  Dan Savage’s It Gets Better Project is a good idea.  The response has been phenomenal.  Even the media says so.

I wanted to make a video for the It Gets Better Project, but the longer I thought about it–the less I could reconcile myself that telling queer youth that “It gets better…three, four, five or six years from now.” That wasn’t good enough for me.  Isn’t that what my guidance counselor in high school had told me?  To wait?  To hang on?  I can’t bring myself to tell queer youth to wait.  I want to make a bigger difference.  Putting off a solution is no solution at all.

In response to Dan Savage’s well intentioned project, another group wants to go further.  The Make It Better Project gives teens and adults tools they can use to affect change now.  The website says “LGBT youth should not have to suffer through bullying at school.  We can Make It Better NOW!”  There are resources for making schools safer for queer youth and their lives better now instead of after they graduate from high school.

Please take a moment to stop by the website, explore what you can do to affect change now, donate money to the organization and spread the word.  An LGBT youth may not be able to wait another three years for the harassment and bullying to stop.

Thank you for caring, no matter how you do it.