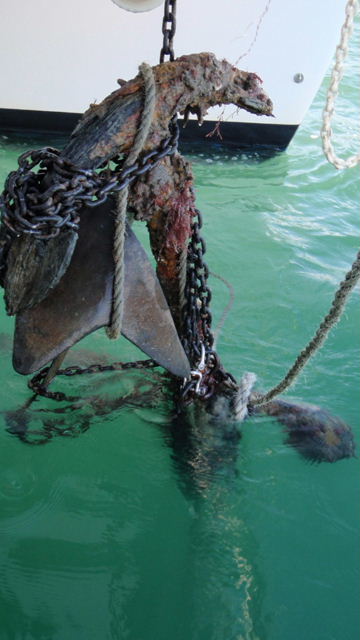 Perhaps my wires are crossed.  I keep looking at this picture trying to figure it out.  Is it an anchor and a shark?  Where does the fin being and the metal end?  There is no shark.  It’s a picture of two anchors lashed together with rope and chain.  One is visible and the other is partially submerged in the water.

I thought that this was a good place to begin, this photo that is.  I have been reading a lot of poetry.  I am half way through Money for Sunsets By Elizabeth J. Colen.  I have read and reread Mark Wunderlich’s book The Anchorage.  And then there are the four metaphysical poets I am reading: Herbert, Marvell, Donne and Vaughan.

The sound and style of verse in my head at the moment looks a little like the anchor.  I began with Colon’s self-circling prose poems.  The intensity of examination to the language and structure of language is amazing.  I feel as if in some of her poems that I can almost hear Paula Abdul singing “Two steps forward. Two steps back…”  Rather than distract from the poems, this hyper-awareness contributes to the pressure and urgency they transmit.  (I will give a full review of her book in September.)

I then shifted to an intensive read of Mark Wunderlich’s The Anchorage, which won the 1999 Lambda Literary Award for poetry.  His book has been our for long enough and reviewed extensively.  I feel that other people have said what I have to say (and more thoroughly than I could at the moment) about the poems therein.  I do want to comment on the shift in styles between the sections of the book.  The book moves from tercets to finish with dense paragraphs of prose poems.  Wunderlich’s flowing lines and internal and off rhymes are a contrast to Colen’s book.  What I took away from The Anchorage was a watery image of winter light, sheets hanging on clothes lines and empty beds.  His book was an extended meditation on the body and longing.

I almost feel as if Wunderlich was an ideal segue into the metaphysical poets who are very much concerned about questions of the body, the soul, longing and desire.  The language and style of verse aside, I feel that there is something very modern about the metaphysical poets, especially Donne.  I think that this is one reason that he continues to be popular; Donne remains witty four hundred years after his death.

What I love the most about the poets of 1600s England is the sheer music of their lines.  It is a relief to hear some apologetically rhymed and metered verse after the barrage of free verse in modern poetry.  The antique language and stilted phrases can come off as corny, but when I read the lines aloud and repeat them my tongue begins to leap from line to line.

Although some of the references in the metaphysical poems are obscure (and I am the sort to look them up) I find that their logic is refreshing.  Poetry as argument.  Poetry as a questioning on philosophical matters.  Poetry as praise, satire and scorn.  There is something delightfully straight forward about these poets that is missing in most modern poems.  Don’t get me wrong, I don’t think that poetry should have to have a clear arc.  Half of poetry is that it means more than it says…  Sometimes the sound is the sense of a poem.  What I am saying is that there is a great obfuscation of meaning in modern poetry that is not found in earlier verse.

I am much less likely to memorize a Rae Armantrout poem than one by Andrew Marvell.  The rhetorical moves and the music in Marvell are clear.

In my head these poems and prose poems are twisting together into a knot of sound and form.  It is exciting even if the results remain hidden beneath the water.

I want to leave you with the opening stanza of John Donne’s poem “Song” so that it can sing in your head for the rest of the day.

“Sweetest love, I do not go,
For weariness of thee,
Nor in hope the world can show
A fitter love for me;…”