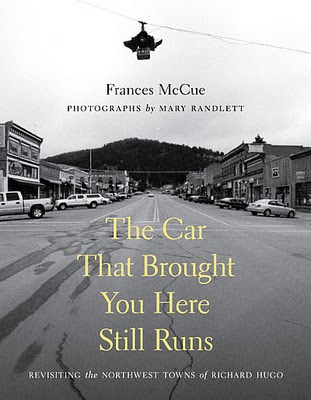 The Car That Brought You Here Still Runs is a tour of the Pacific Northwest through the eyes of Richard Hugo’s poems. If you don’t know who Richard Hugo is, you are missing out. Born in White Center, Washington and buried in Missoula, Montana, Hugo’s poetry encompasses the landscape and places of the northwest. Although Hugo passed away in 1982, his work continues to inspire and instruct modern writers.

Frances McCue, a true devotee of Hugo follows a winding course through Washington, Idaho and Montana using his poetry and life as a road map. McCue’s book is part travelogue, part literary history, mixed with memoir and dashed with speculation. There is no single genre that this book falls easily into. Hugo fans, poetry lovers and northwest travelers will all find something between its covers.

Hugo’s poems are a lesson in alienation and longing to fit in. McCue travels to the towns that surface in the poems: Phillipsburg, Wallace, Dixon, Butte, White Center and others with Hugo’s lens of words. She also visits each place with her own inquisitive gaze. This double vision creates a tension of perception. It examines the truth in both the imagination and physical facts. McCue also adds to her essays the voices of Hugo’s friends, critics and colleagues to give a broader vision of the author. She also talks to many people who live in these towns who have never heard of Hugo.

A wonderful addition to McCue’s exhaustive knowledge of Hugo and his work was the photography of Mary Randlett. She has been photography the Pacific Northwest and its people for nearly over 55 years. Randlett’s black and white photographs of the towns and landscapes in Hugo’s work add a stunning complexity to The Car That Brought You Here Still Runs. Even her most direct shots evoke a charged mood. Randlett’s photos lend McCue’s words and Hugo’s poems an almost premonitory quality.

This is a book for people who love pilgrimage. Twenty-four of Hugo’s best poems of place are sandwiched in between Randlett’s photographs and McCue’s tightly written, deceptively broad essays. Each chapter in the book is divided by town, although you cannot always travel from one place to the next in a direct route, nor chronologically.

One of my favorite chapters is about the Dixon Bar. Hugo wrote a poem that inspired a feud, which stretches from Dixon, MT to The New Yorker and spans nearly forty years. You can read an excellent news article about the feud and McCue’s book here: http://missoulian.com/lifestyles/territory/article_b25ef6ba-548f-11df-b6a8-001cc4c002e0.html

To hear Hugo read his own work, go here: http://www.youtube.com/watch?v=56Vm9kdNlf0&feature=related

This book is a work of love to Hugo and the towns of the Pacific Northwest and one, which I loved to read.