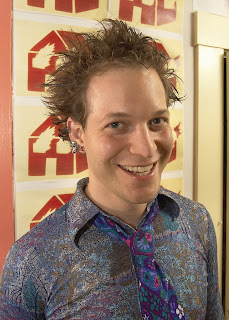 Mattilda Bernstein Sycamore is the author of two novels, So Many Ways to Sleep Badly (City Lights 2008) and Pulling Taffy (Suspect Thoughts 2003). Sycamore is the editor of four nonfiction anthologies, most recently Nobody Passes: Rejecting the Rules of Gender and Conformity (Seal 2007) and an expanded second edition of That’s Revolting! Queer Strategies for Resisting Assimilation (Soft Skull 2008). She lives in San Francisco, CA.

This interview was conducted in September 2008

Jory Mickelson: Tell us more about yourself.

Mattilda Bernstein Sycamore: I grew up in an upper class Jewish family and was the typical overachiever student. In order to learn what I wanted to learn—that is unlearn my background, privilege masking itself as violence, I came to San Francisco when I was nineteen. I became immersed in finding and creating the kinds of cultures I write about. I learned the truths behind the myths of higher education, the idea of career, and the values of assimilation.

MBS: I started writing as a child. Writing is the one way that I have to process my life, to cope. I started by writing elaborate escape fantasies. In my late teens, I mostly wrote poetry and became interested in language poetry…how to take everything you think and reduce it into five words, the concentration on the placement of words on the page, distilling my experience into something tiny. I became obsessed with form.

I then started writing prose, stories about sex work. I always believed in experimentation. I felt like I articulated and experience I didn’t see translated on any interesting level in print. This is where writing became about simultaneously articulating and processing my life and the lives of those around me. From this point, I began writing political essays. Not many people doing direct action (activism) write about it.

MBS: I learned a lot about writing by editing anthologies. It taught me how to think of an idea and to put the idea out there, seeing how people relate to it. The goal is not to create consensus, but to gather as many voices as possible.

My first publication was in an anthology, Queerview Mirror. Anthologies are more like what literary magazines are supposed to be. They allow a space for writers who don’t have a career or connection already. It is a place to find publication, usually around a specific idea.

JM: Has having several books published affected your writing?

MBS: Being published was exciting, but it did not change my confidence in my work. I have always been confident in my writing. I was excited that other people had access to my work and that I was able to see how they responded to it.

I have six books that have been published and in some ways, I am still an outsider to mainstream, commercial publishing. I think the big tragedy in publishing is the current obsession with niche marketing. This limits the kind of work that is allowed to been seen in the world.

There are formulas to what supposedly sells. An agent told me that my newest book needed more narrative structure and closure or that I should call it a memoire. The agent believed that this would allow my book to become a hot marketing item. I resisted this. I have been lucky enough and persistent enough to publish my work on my own terms.

JM: What are your views on queer literature and publishing?

MBS: In the 1980s and 1990s there was a lot of nonconventional literature being published. Kathy Acker and Paris Schulman were considered edgy. Now corporate publishing wouldn’t pick up these writers. It seems that everything needs to be clearly delineated, such as gay white men who write funny memoires. People are uncomfortable with things that don’t fit. Even small presses suffer from this. Is it a lesbian book? Is it a gay men’s book? It always comes down to marketing. Trans(gender) is trendy now. There are memoires by several trans people. What about a book about being a trans person who doesn’t want to go through the entire transition? A theme like this would not be embraced by the publishing industry.

I think that publishers should begin by instead of asking, “Will this sell?” they should find something that inspires them and then figure out how to make it sell.

JM: What writers have influenced your own work?

MBS: David Wojnarowicz’s Close to Knives is the first book that ever expressed my own sense of rage at the world, and also hope in the same world. The writing is explosive, elegant and hallucinatory. It is a deeply political work at the same time.

Lissa McLaughlin’s Troubled by His Complexion is written in the second person. She uses narrative, but not in a linear manner. It freed me. It allowed me to break away from any set style of writing.

Rebecca Brown creates a world that you have to enter into. You ask yourself, “Where am I?” Her writing overlaps between what is felt and what really happens. Her work is much messier than conventional prose. Emotion and reality are on par with one another. These are just a few of the authors how have influenced me.

JM: What is your role as a writer in the world?

MBS: I feel that being a writer means that I process the world around me and articulate myself in the world. At its most primal, writing is about survival. On a second level, a lot of my writing is editing. As an editor, my role is to put others work out there on their own terms. I always want to interject critical voices onto ideas that remain silent or are being erased: queer assimilation, sex abuse and sex work to name a few. Writing for me comes down to survival, critique, accountability and instigation.