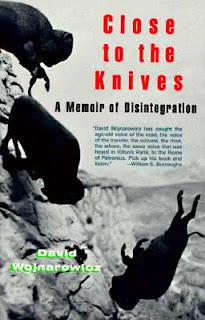 One of the perks of interviewing LGBTQ authors is that they love books as much as I do. Even better, they love books that I didn’t know existed. When asked about favorite books, author Mattilda Bernstein Sycamore said that Wojnarowicz’s work was “the first book that ever expressed my own sense of rage at the world, and also hope at the same world.” With a recommendation like that, I had read it.

I’ve been trying to write about Close to the Knives for months, but didn’t know what to say. My first attempt ended up as a series of poems, the oral histories of dead friends preserved in verse. After reading Wojnarowicz’s essays, I was scared that I might forget what I need to remember. His work has no easy definition: part memoir, part social commentary on America during the AIDS crisis, part hallucinatory fiction and also a radical vision of what being queer might mean. Oh, and the prose is stunning in both senses—glamorous and a hard electric shock.

Close to the Knives paints a portrait of America under siege by AIDS and the Regan administration. “I feel that I’m caught in the invisible arms of government in a country slowly dying beyond our grasp…” He could have been writing about a post-9/11 America.

Wojnarowicz never fails to tell the reader hard emotional truth about culture and class, “Some of us are born with the crosshairs of a rifle scope printed on our backs or skulls. Sometimes it’s a matter of thought, sometimes activity, but most times its color.” This book isn’t just a series of impassion essays about the evils of big government and homogenized culture; it delves into the personal (actual and imagined) history of Wojnarowicz’s life. It gets gritty, convoluted and joyful by turns.

Wojnarowicz is a master craftsman of language. He turns out sentence after beautiful sentence, “…small sparks of airplanes in the late blue and yellow and these black pills stirring like small bees in my stomach.”

He also has a deft hand for capturing a sense of place, whether that be driving through a Southwestern desert or a having video booth sex in NYC with strangers. His descriptive prose is exacting brushstrokes on the page, “Outside the windows the river light turned from blues to grays to flashes of rain.”

Close to the Knives resonates as much today as it did nearly twenty years ago. I keep coming back to this book even though I finished it months ago. Passages like “American’s can’t deal with death unless they own it. If they own it, they celebrate it, like in the air force base museum to the atomic bomb” wake me up to the fact that monolithic-America is still alive and hungry.

In a post-Bush America with increasing visibility for queer and transgendered people, we feel safer. Some of Wojnarowicz’s ideas about fringe and outsider culture may be hard to grasp for people coming up and coming out in a same-sex marriage world, but in this “post-queer” world I think that Close to the Knives becomes essential reading. Wojnarowicz will not fail to upset you, get you angry or move you to tears.