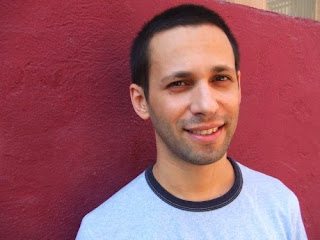 Lawrence Schimel is the Lambda Literary Award-winning author and anthologist of The Mammoth Book of Gay Erotica, Boy Meets Boy, The Drag Queen of Elfland, and Kosher Meat, among other titles. His most recent collection (with translations into Spanish, Portuguese and German) is His Tongue. He lives in Madrid, Spain.

This interview was conducted in May 2008.

Jory Mickelson: Tell me about your background as a writer and a publisher…

Lawrence Schimel: As a writer, I am what I sometimes call a bookseller’s nightmare, because I work in so many different genres and areas, and don’t often produce two books that are very much like one another. I’m not really building an audience the way that, say, a mystery writer can, because readers come to know what the next book (at least in the same series) is probably going to be like. I write and publish poetry, fiction, anthologies, essays, comics and children’s books as well. I also write books in both English and Spanish (sometimes translating myself in either direction, sometimes translated by others). So I’m really all over the board. My reading interests are varied, and I think this winds up reflected in my own creative output…

As a publisher, when I was an undergrad, there was a Vandercook letterpress in the basement of my dorm. I asked some poets I knew for poems and printed them up as broadsides under the name, A Midsummer Night’s Press. When I graduated, the press went on hiatus until 2007 when started producing commercially printed books, such as Achy Obejas’ This is What Happened in Our Other Life.

LS: I was (and still am) a voracious reader. I began writing my own stories in high school, and submitting them for publication. So by the time I was applying to colleges, I was already used to the whole waiting and rejection/acceptance process! I read a lot of fantasy and science fiction, so much of what I wrote was also in those genres, but I think one of the very first pieces I placed was a mainstream short-short in a magazine titled Modern Short Stories.

JM: What writers inform and inspire your own work and what you choose to publish?

LS: My influences are quite varied, and we constantly change and evolve as both readers and writers, so my responses to writers (or their individual works) is not always consistent. I may like a certain phase in a writer’s output but not anything before or after, but I’m very grateful for those works that I do respond to. Right now my poetry influences are in flux, so I won’t answer as to that genre. In general, I admire Paul Russell’s writing a lot, especially his novels Sea of Tranquility and War Against the Animals. I find May Sarton’s prose to be very resonant, especially works like The Small Room and Faithful Are the Wounds. I think Australian gay novelist Neal Drinnan is woefully underappreciated. I enjoy the feminist fairy tales of Nancy Springer, Plumage and Fair Peril. Three desert island collections of personal essays: Tony Kushner’s Thinking About the Longstanding Problems of Virtue and Happiness, Ursula K. Le Guin’s Dancing at the Edge of the World, and Nancy Willard’s Telling Time.

JM: What projects are you currently working on?

LS: Right now Richard Labonté and I are editing a companion volume to our last anthology, FIRST PERSON QUEER, this time focusing on advice from and for the GLBT community, titled SECOND PERSON QUEER.

I am also finishing a book of poems written in Spanish, DESAYUNO EN LA CAMA (Breakfast in Bed).

With A Midsummer Night’s Press, we’re working on the new annual series, BEST GAY POETRY and BEST LESBIAN POETRY (production of which is, alas, running late).

JM: What is your least favorite aspect of the work you do?

LS: As a writer: dealing with publishers who have infringed or otherwise defaulted on terms in the contract. Alas, this happens more often than I would like!

As an editor: Rejecting writers!

But I tend to prefer not to only dwell on the negative, so let me flip the question and say that the absolute best part is connecting with readers who’ve found resonance in something I published. (Sometimes the first reader who finds that sort of resonance is an editor!)

JM: Tell us how you go about revising your own work?

LS: I don’t write in a linear fashion, especially prose, I tend to jump around, so I am constantly revising or rewriting as I create, making bridges between sections or scenes, going back to fill things in.

I do miss not having an English-language critique group here in Madrid.

JM: What was your first publication?

LS: My first book was an anthology of homoerotic poetry that I edited under a pseudonym. My first book under my own name was Switch Hitters: Lesbians Write Gay Male Erotica and Gay Men Write Lesbian Erotica, co-edited with Carol Queen.

JM: Do you have advice for people starting to write?

LS: The story or poem doesn’t care if you’ve been published before or not, it just wants to be the best story of poem it can be. Focus on writing it as well as you can, and then worry about publication, etc.

JM: What are your feelings about queer literature in the United States? Do you feel that the status of LGBT writing differs in Spain and Western Europe?

LS: I think literature, in general, is not as valued in the US as it is in Europe, and as a result creators of literature, and the power of literature, are likewise diminished. It’s not that there isn’t prejudice (in the media, among booksellers, etc.) with regard to queer books in Europe. At the same time, the way books are sold here is so different: there isn’t a gay section anywhere, or often sections for genres; some bookstores still stock titles by publisher! Although usually the division is fiction written in Spanish or fiction in translation.

Keep in mind that Spain is a country which has full legal rights for homosexuals, so the approach to the books (from writers and readers) is different. There is less struggle (for rights, carving a niche in the marketplace, whatever) and more reflection of our lives.

JM: As an editor and publisher, how do you view the market for gay and lesbian writers trying to get their work out? Are there challenges?

LS: I think that book publishing right now is in somewhat of a crisis, based largely on factors of how books are sold. The distribution channels, especially for independent books, has all but dried up or become over consolidated. Likewise, the network of specialty GLBT bookstores has in large part disappeared. This leaves a vacuum of books getting to readers, and I don’t really see it being filled through other means, I think people are just foregoing books more and more and turning to other media or areas to get that sort of reflection of their lives in culture.

I think there is room for people to do more do-it-yourself publishing, but this requires a business sense, not just an artistic one. This seems to be the direction the music industry is moving in as well. A lot depends on why one writes or wants to be published. If it’s just about finding an audience, there are ways of going about this, from creating a blog or posting one’s work online, to readings or etc. If one is trying to build a platform and support oneself from writing, that’s where things become very complicated… whether one is queer or not.

One of the advantages that an unknown queer author has over her or his straight counterparts is that there are still queer READERS out there who are looking to see their lives reflected in books, so they may be more willing to take a chance on an unknown or newer authors (if they can be made aware of the books or otherwise have it brought to their attention) simply because of the queer subject matter. At the same time, many non-queer readers will have no interest in reading our work, even if these same readers are open to the heterosexual tales of people unlike them: stories from other countries, other cultures, etc.

Of course, I always ask queer writers who complain that straights aren’t interested in our work, how much they read across the gender divide within our homosocial world, to read lesbian books if they are a gay man and vice versa, and why should we expect heterosexuals to be interested in our lives and our literatures if, as is so often the case, we aren’t ourselves within our homosocial subculture.